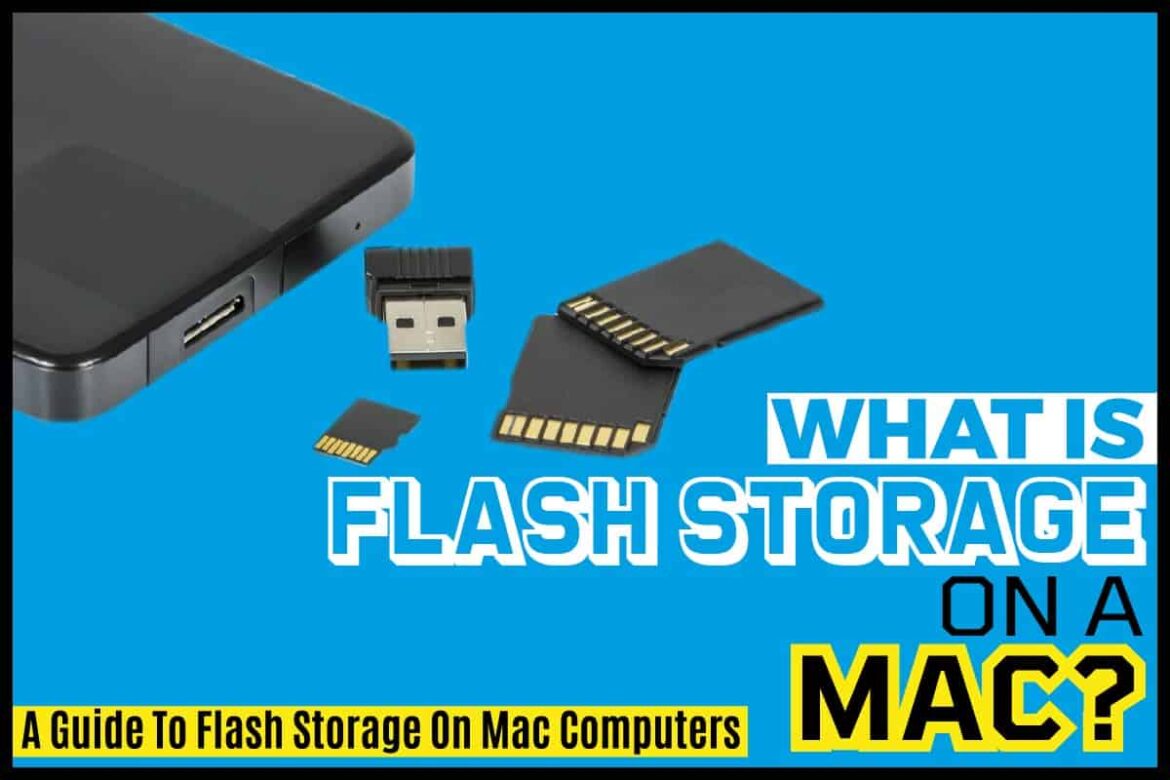 Flash storage in Mac computers works by maintaining stored data without any reliance on the external power source. The data are typically stored in cells that are protected internally by floating gates. The tunneling electrons typically change the floating gates’ electronic charge in a flash, and that is where the storage system derives its name from. Though Flash storage can work independently, you still need a regular storage device like the SSD or HDD for storing data.

So, what is Flash storage on a Mac?

Flash storage on a Mac can be described as a solid-state technology that relies on flash memory chips for writing and storing data on Mac devices.

Unlike traditional storage options, flash memory relies on non-volatile memory, which means that data or files stored are not lost, especially when the power source is turned off. Flash storage is readily available and also consumes less energy. Flash memory consumes much less physical space than your regular mechanical disk storage.

What Are The Features Of Flash Storage On Mac?

Flash is another storage medium with some silicon chips written to or erased from with or without a power source. You can consider the features of flash storage in terms of speed, components, volatility, and ease of usage.

The main feature of flash storage is speed. Its speed makes it a very great option for storing enterprise data. It is pretty faster than the spinning hard disk drives HDDs.

Even when the flash storage is being moved, it remains intact and holds its data in place. Though some computer experts don’t agree with the notion that flash storages don’t fail, but agree they are more stable than hard disks.

Non-volatility is another striking feature of flash storage. This short description means flash storage can retain its memory even when the power source is switched off. This feature sets the flash storage apart from the RAM (Read Only Memory). RAM is quite fast, but data is erased on it each time power is turned off.

Flash storage is easily rewritable; hence, it is ideal for storing data that can change frequently.

Flash storages also come in wide varieties, but the commonest ones are NOR and NAND. NOR was the initial flash storage type to be designed, though it is swift for read but not as fast as NAND for writes.

NOR is mainly used where coding is widely used, primarily where the codes will be written once and then read a lot. Since NAND is faster for writes and takes up much less space than NOR, it remains less expensive. Most of the flash storage options used in making SSDs belong to the NAND category.

Differences Between Flash Storage And SSD

Flash and SSD are often used interchangeably, but you should keep in mind that they are neither rivals nor the same.

Flash memory in Mac is non-volatile but high-speed read and write media that stores files and data. You can find Flash in different forms, including those in USB sticks and smartphones. On the other hand, SSD is a form of storage media that uses a form of flash memory instead of a magnet to write, store, and read stored files.

SSD is a traditional storage disk but comes with a faster read and write, quicker speed, lower heat generation, and lower energy or power consumption. The tradeoff for all the benefits of SSD is the higher costs per byte. This simple explanation means that SSD is more expensive than Flash memory on Mac.

Flash has replaced disks in all the flash memory models, and it supports most of the workloads on Mac computers. Flash memory will also require some management layer to move your cold data to other storage tiers when you need your files on such secondary storage. Some flash memory manufacturers have developed cloud storage for the temporary storage of such files.

What Are The Advantages And Disadvantages Of Flash Storage In Mac?

Both flash storage and SSDs are faster than the HDD, and both do not have moving parts like the HDDs. Cheaper Flash storage also means cheaper SSD since SSDs are made from flash storage. The main difference here is that flash memory can be slower than SSD.

Portability is one of the main advantages of flash storage; In addition to the one inside Mac devices, you can carry external flash storage around. You can throw them inside your pocket and then pop them out when you need them.

The flash storage weighs almost nothing, and it leaves no footprint on the environment. It used to come in smaller sizes of less than 10GB; today, you can find flash storage of up to 2TB as external or internal memory for Mac.

Since it comes with no moving parts and can work without power, flash storage has a much lower risk of losing information. You can copy and take your files everywhere you go. Any accidental drop of flash storage will have no impact on the information inside.

Price and rewrite limitations are the only disadvantages of flash storage. Since it is relatively newer than the hard drive, its cost per byte is still higher. Still, as it happens with newer technologies, prices will eventually drop with advancements in flash storage technologies.

Another disadvantage of flash storage in Mac is that there is a limit to the number of times. You can erase files on it. For many flash storage options, you may erase information up to 100,000 times, which could seriously impact the users. For instance, a power user may have to purchase several flash storages over some time.

As a Mac user, you may upgrade to newer models of flash storage that come with more prominent memories, and you wouldn’t have to worry about maximum rewrite limitations.

For Mac device users, you may install some flash storage devices to be pretty hard to remove. Flash storages attached to the motherboard of Mac devices are the most difficult to remove, unlike those inside their slots.

One can say that the advantages of flash storage far outweigh their disadvantages, but it is also essential to weigh your options before making your final choice.

The choice of storage on Mac devices, just like any other computer device, is generally between Flash storage, SSDs, and hard drive storage. While hard drives with moving components are more susceptible to damages than other options, they are usually the cheapest option for budget-conscious users. SSDs, on the other hand, are much safer than both flash storage and HDD but can add up in costs quickly; hence it is the most expensive option of the three.

Flash storage offers all advantages that SSDs offer, and it is perfect for Mac users. Still, the limitation on several erasing of the storage can be of significant disadvantage to the users.

Budgetary considerations should be the last factor to consider, especially when the size of memory and quality is of more importance.

Why Are SSD So Expensive? A Guide To Buying And Using SSD