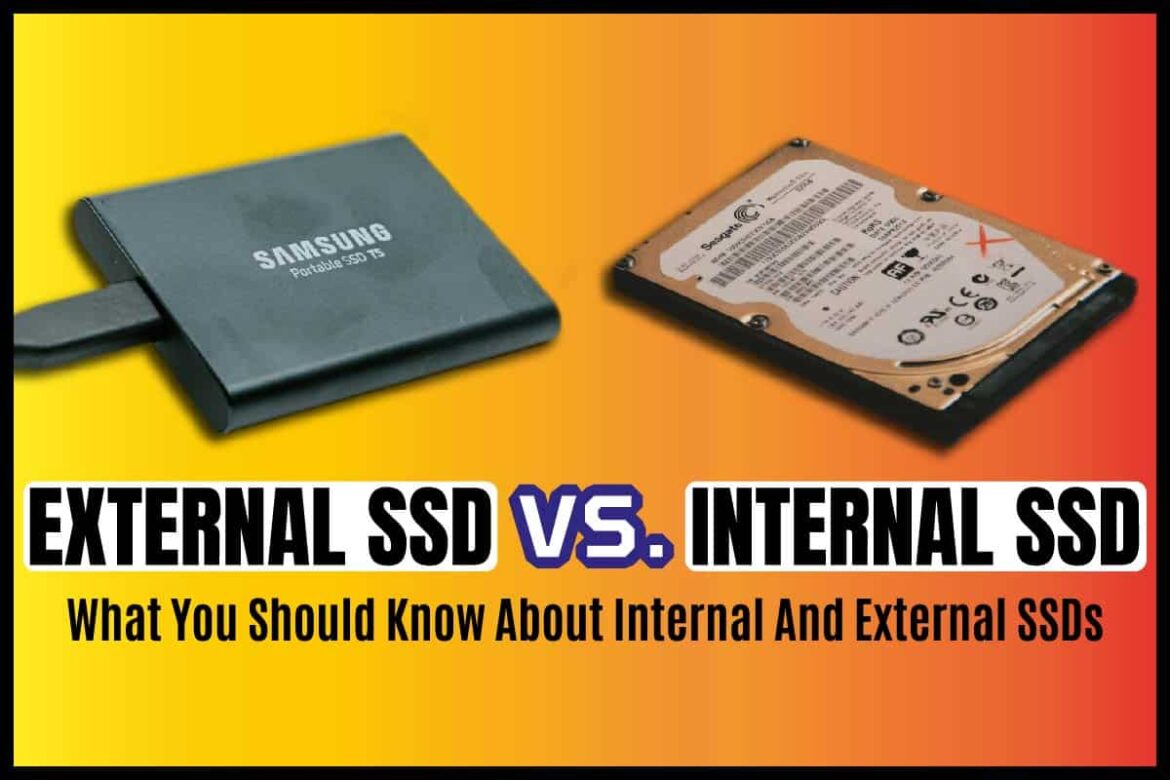 Internal SSD is the one that is located permanently inside the computer. It is permanently located on the laptop’s motherboard though you can find some that you can easily remove. External SSD, on the other hand, is connected to a computer via a USB drive. They are not located inside a computer but purchased separately. You will likely need an external SSD if the internal one is filled up and cannot be removed from the motherboard.

So what is the main difference between Internal and External SSD?

Considering the form factors, there seem to be some striking differences between the internal and external SSDs.

There are three form factors for the internal SSD, and these are; 2.5 inches, M2, and mSATA. External SSD has form factors such as X6 and X8. Both internal and external SSD is universally compatible with a wide range of devices.

The 2.5 inches internal SSD form factor has remained the standard form factor for many years. This size of internal SSD will fit inside the drive bay of your laptop and PC conveniently. These form factors are created to reduce the need to replace connecting interface cables, creating a quicker transition to better performance.

The M2 form factor is the minor form factor you will find the internal SSD. The M2 is the SSD that is attached to the motherboard via the computer’s M2 socket. The M2 SSD is typically found in ultra-books and tablets that have limited spaces.

The M2 SSD is known to possess the best read and write speed due to its interface. The m-SATA SSD is one-eighth the size of the 2.5-inch form factor, and they are inserted internally by plugging them into the m-SATA socket located on the computer’s motherboard.

The m-SATA SSDs are found primarily on ultra-thin computers and mobile devices. They can also come as secondary drives in some computer desktops.

The external SSD form factors like the Crucial X6 and X8 are designed with the same technology as the m-SATA, M2, and 2.5-inch form factors of the internal SSDs. The main difference here is that the X6 and X8 come with added enclosures plus a cable interface.

External SSDs are pretty portable, and you can increase their sizes much easier than internal SSDs that are mainly attached permanently to the computer.

The SSD Interface Differences Between Internal And External SSDs

Knowing how your SSD connects through different interfaces is crucial as learning about other striking features between them. There are several interfaces, but in most cases, you will find Internal SSDs with PCIe or SATA interfaces, while external SSDs come with Thunderbolt or USB interfaces.

The Serial ATA or SATA is the most common SSD interface and most common for the internal 2.5 drives. This interface offers great interoperability, but it is older than the PCLe. SATA brought several features when it was released; for instance, it makes it easier to change drives quickly.

It was initially developed for the hard drives, but the SSD adopted the same interface to help users upgrade their storage drives from HDD to SSD. The latest generation of SATA interface for internal SSD can transfer files at up to 6GB/seconds, making it one of the fastest interfaces around.

The PCI Express, also known as PCLe, is a newer high-speed serial interface for internal SSDs. This interface comes in a smaller size. It is a physical connection capable of transmitting data from one device to another or between a computer and a peripheral device.

This interface can connect via multiple lanes, and this is the main benefit of having it as your internal SSD. PCLe is known to dedicate four different lanes for storage on devices; hence data exchange is four times faster than what obtains on SATA.

As mentioned earlier, external SSD can work only via USB or thunderbolt connectivity. Almost all computers today have multiple USB ports of different versions, including the USB 2.0 and 3.0.

The USB connector your external SSD uses will determine the speed of transfer of files. For instance, USB 2.0, also known as Type A, are slower than USB 3.0 or Type B. The Crucial X8 SSD also has a higher speed than that crucial X6 option.

From the look of statistics, it is easy to say that an external SSD is faster on average than an internal SSD. This is also the main difference one should consider.

Thunderbolt connectivity for an external drive was designed through a collaboration between Intel and Apple. The interface was designed to connect the peripherals of computers. The latest version of Thunderbolt is version 3 or the third generation.

Speeding Up Your Existing Internal And External SSD

In addition to whether you use internal or external SSD, some other factors may contribute to the speed of your memory drive.

Experts recommend that you keep about 15% of your SSD free. This means you need to eliminate unwanted or unused files that take up space constantly. Keep in mind that factors like available storage, firmware, trim, and tracking your SSD’s performance can help improve speed.

The writing speed of the drive can be affected directly, mainly when you have used up space to the near end. It is also essential that you keep the firmware updated. This will ensure that your SS runs at its peak performance and help avoid specific technical issues.

It would be best to use a self-monitoring tool to monitor the performance and space on your internal or external SSD. This tool can be found for free online or at a token fee, depending on its features. This tool conducts analysis and then uses report technology to give you information on the health status of your SSD. Fortunately, you can use such devices on both internal and external SSDs.

You don’t have to wait until you require more space on your SSD before purchasing one. It is easier to get a 1TB internal SSD in the first place instead of buying an external SSD later on. This, however, does not mean that external SSD is a bad idea. It gives you the flexibility of carrying your memory with you without having to take the computer everywhere.

So, which is better between internal and external SSDs? The answer to this will depend on your computer system, form factor, and interface. While the newest SSDs have the most incredible write speeds, you may not attain the highest speeds when using older connections like USB 2.0. This is particularly applicable to external drives. Pairing different SSDs with different interfaces can drastically affect the speed of your SSD.

You should pay more importance to the form factor. You must check your computer’s information to be sure of what interface and form factor it supports to work out the right speed of the SSD. The SSD slot on the computer’s motherboard is another place to check for SSD information. You may also look for more info on the manufacturer’s website regarding the form factor and component profile.

The bottom line is that both internal and external SSD offers the same benefits, just that the interface of external SSD can give it an edge in terms of speed.

The Best Dslr Camera For Your Budget

8 Of The Best Laptops For A Cricut...