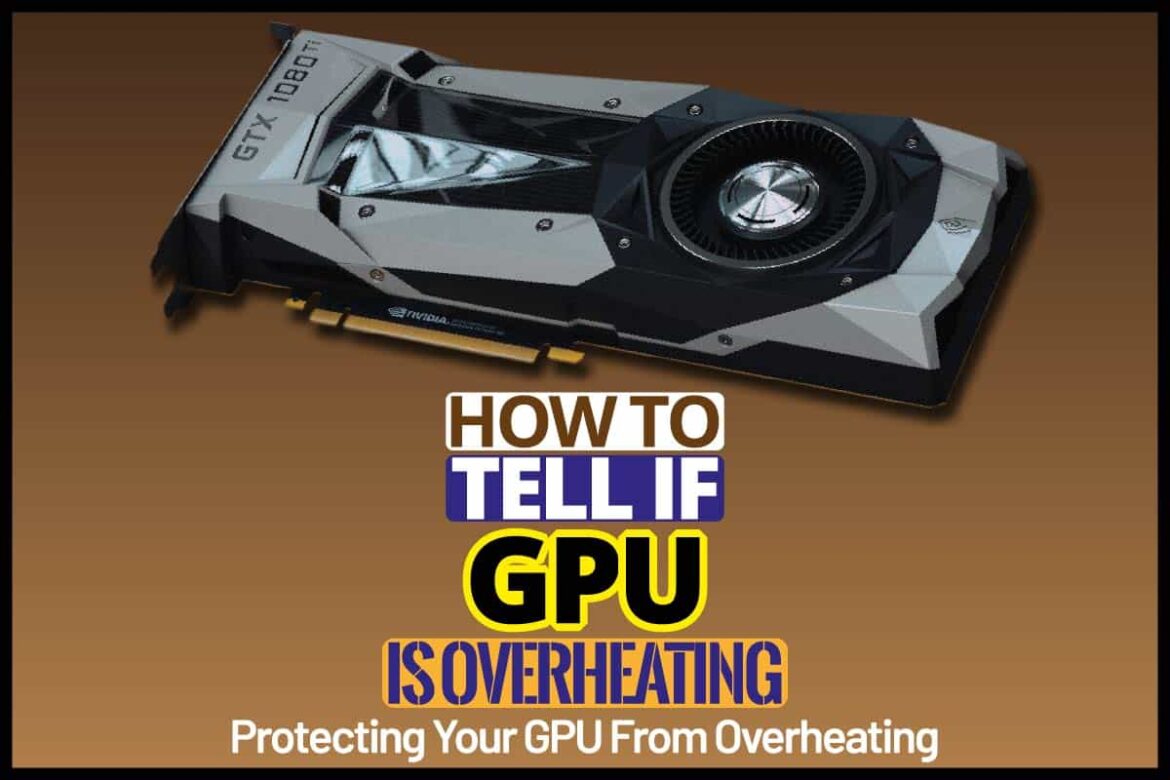 There are several reasons why your GPU can develop overheating, and one of such reasons is when it is overclocked, significantly when you change the speed from default settings. The GPU may also become overheated when clouds of dust and debris around the hardware casing and internal components. You may need proper diagnosis or troubleshooting to ascertain the leading cause of overheating of your computer’s GPU.

So, how do you tell if GPU is Overheating?

The best way to tell if your GPU is overheating is to measure its operational temperature.

Though you will likely suspect an overheated GPU when the performance of your computer drops, perhaps such a drop in performance may occur as a result of other issues and not overheating. You should be able to find your GPU optimal operational range on the product manual and any temperature recorded outside of such range means the GPU is overheating.

A drop in performance is usually a sign of thermal throttling in your device. It occurs when the GPU is overheating, and the reaction to this is that the base clock of the GPU turns down to maintain safe operational temperatures.

To check your CPU temperature and discover if there is overheating, you need to install a third-party temperature checker. These tools do a lot more than check and monitor your GPU temperatures and help prevent overheating.

Though it is not immediately clear what a good or bad GPU temperature is. If, for instance, you consider the temperature of your idle processor, you may likely see it within a 30C and 70C range. You may have to check your product web page from the manufacturer’s website to ascertain the maximum temperatures allowed.

What Are The Causes Of GPU Failure?

Overheating is just one of the issues that can lead to GPU failures. Most people often discovered the death of the GPU when their computer crashes in the middle of the action like gaming or video editing. On the product page, the maximum temperature is usually listed beside the “T Case” or “T Junction.”

Once you have downloaded and install a GPU temperature-monitoring tool, go to the central pane of the tool and scroll down to see all information regarding your GPU.

You will surely see the voltage of each core component and the amount of GOU that is being optimized. The information will also display the core temperature alongside the minimum and maximum temperatures.

To save the current information displayed from the pane of the GPU temperature-monitoring tool, press the “Ctrl + S” shortcut, and you may even switch to dark mode to reduce the temperatures of the GPU further.

You can find different types of monitoring tools; some are specifically designed for heavy computer users like gamers.  The temperature monitoring tools designed for those who plan on overclocking their computers will also help monitor PC temperatures. These tools will likely display graphs on the home screen showing you GPU and CPU temperatures, plus other necessary information.

Why Does GPUs Fail?

Faulty manufacturing is one reason why GPUs fail; also, the incompatibility of installed graphics cards may cause such failure. There could be a static overload when installing a graphics card, and that could cause GPU failure. Similarly, moisture can build up in graphics cards and cause damages to specific components.

GPU can also fail when overheating is brought about by the accumulation of dirt and debris on cooling components or overheating brought about by broken bearings on the cooling fans. When you run your graphics cards on games with some incompatible drivers for a long time, there could also be a GPU failure.

To avoid all these problems and many more, you need to maintain your computer regularly, physically and digitally. You need to update your graphics card and all drivers connected with specific operations like gaming.

What Are The Signs Your GPU Is Damaged?

Your computer’s GPU’s main sign is dying when the system crashes and wouldn’t reboot. You may be running your games with the latest graphics card version, and suddenly the computer shuts down, and there is no monitor signal. You might be lucky to have a computer with a motherboard that senses component failure; such a motherboard will display GPU failure in codes.

Glitches with graphics while playing games is another sign of GPU failure. In this situation, the GPU will render the graphics incorrectly, and it happens when the graphics cards don’t support the game’s software. Some disruptions to the graphics caused by GPU failure include; off-color pixelation, screen glitches, screen flickering, and artifacts randomly on different parts of the screen.

Abnormal fan performance and noises can also be a sign of GPU failure. Many GPU fans will spin when the GPU is on higher loads, which will prevent the GPU’s death prematurely. Not all GPU fans will run simultaneously; they wouldn’t run if you indulge in smaller tasks like web browsing. If, however, you run a game that has software that your graphics card doesn’t support, the bearings on your GPU fans will wear out quicker. When your GPU fans stop working under a heavy load, the GPU cards will die quickly.

Ways Of Preventing GPU From Overheating

Regardless of what you do with your computer, it would be best to do everything possible and safe to regulate the GPU temperatures within the recommended range. If possible, you should open the hard case and vacuum the settled dust out of it. With dust surrounding the GPU and its internal components, cool air will not replace hot air. Debris and specks of dust will also make your GPU fan work harder than necessary while achieving minimal results.

If possible, you should consider having another case fan. If you already have a GPU fan at the rear panel blowing out hot air into the case, you should add an intake fan into the front that will blow cool air into the case. Two fans will increase the inflow of cool air to replace hot air flowing out. Installing a case fan will require that you attach it to the chassis with screws before connecting the power source to a four-pin connector from the same power supply. Take note of some fans that come with small motherboard connectors.

It would be best if you considered installing a PCI card fan to blow your graphic cards when temperatures rise beyond the minimum. The PCI card fan typically occupies the space of the expansion card, and it can be powered by a connection to the internal power source of the computer.

You may also want to consider adding an aftermarket GPU cooler to the graphics card on your computer. This GPU cooler can be very bulky, and you may have to disassemble the card to remove its main cooler before installing them. GPU cooler may also require large heat sinks to dissipate heat speedily out of the system, and they may not even fit into a desktop computer. For these reasons, you should carefully select the ideal GPU cooler to add to your system.

Maintaining a cool environment when using your computer is one essential way of protecting your GPU. Heated environments are not conducive for GPUs. Therefore, you should turn on the air conditioner, fan, or open the windows and allow fresh air to circulate and replace hot air from your computer. It would be best if you also endeavoured to clean the environment and eliminate dust settling on surfaces. If possible, put your computer inside a bag or a cover after use, especially before you sleep at night.

Your computer GPU plays a critical role in enhancing the performance of your computer system; unfortunately, it is easy to ignore it because it is out of sight. Please pay attention to the GPU and every other thing or component connected to it, and these include the graphic cards. Sometimes, an update of graphic cards or the computer’s operating system may speed up the efficiency and performance of your GPU. If you find it difficult to open the case and access the GPU  inside, you should instead allow a technician to handle the job for you.

What Happens If You Drill Into A Live...

Why Does My Bluetooth Keep Cutting Out And...

How To Stop Airpods From Reading Texts –...

Why Are Selfies Backward?

How To Block Bluetooth Signal On Your Device?

Why Does My Bluetooth Keep Disconnecting?

How To Connect Multiple Bluetooth Speakers

How To Make SD Card Default Storage On...