Do GPU Fans Always Spin? What You Should Know About GPU Fans 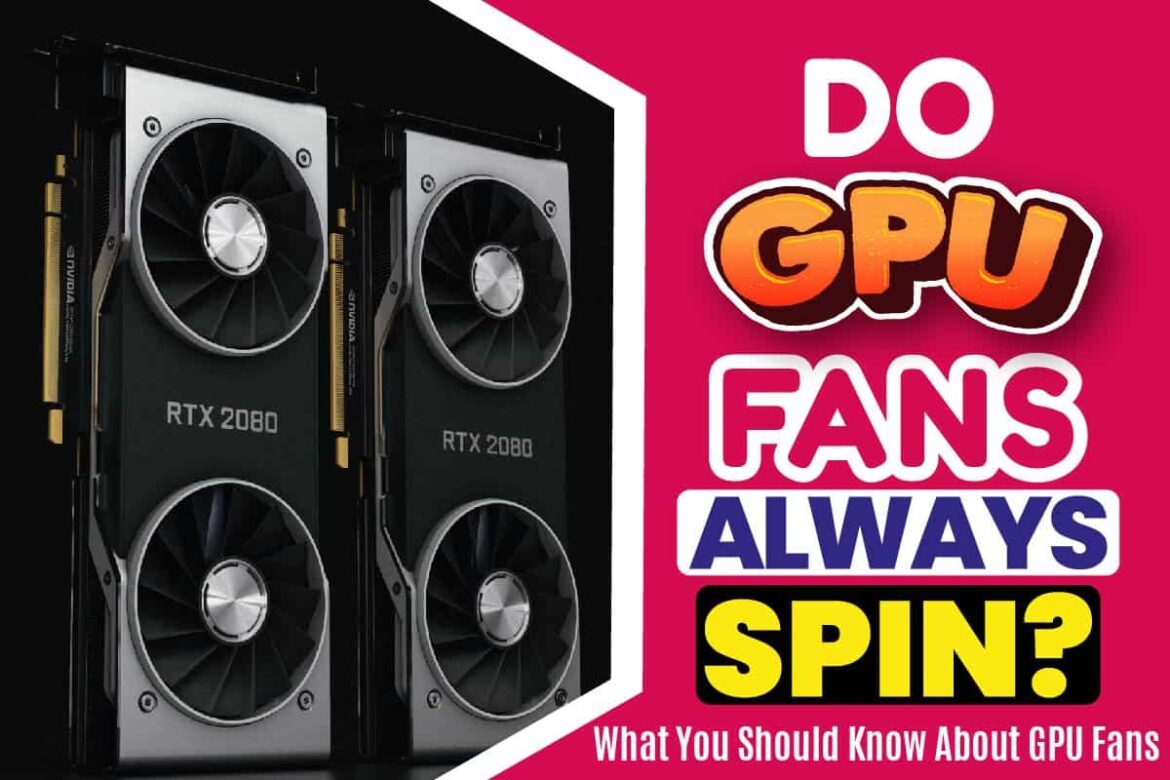 Like the CPU fan, the GPU fan is also attached to the computer case, and it actively cools down the GPU. Testing GPU fans is critical first to understand their capacity and also to reduce the risks of failure. An effective GPU fan will ensure that your GPU’s temperature is maintained at the optimal level to prevent a total shutdown of your computer system. It also contributes to keeping the speed of your computer operation.

So, Do GPU Fans Always Spin?

No, GPU fans only begin to spin at specific temperatures.

In NVIDIA cards with the default settings, the GPU fans will start spinning once temperatures around it reach between 50 and 55C degrees. The fans will continue spinning until they cool the components down to about 30C degrees. GPU fans will not spin even when you power on the computer.

Fans are designed to run always; hence, it is not bad for a GPU to run all the time, but for specific reasons, the GPU fan should run only when temperatures rise to a particular limit.

The GPU fan can curve at 100% when the temperature reaches 70C degrees, which means the fan will be at its top speed at this temperature and quickly taper down to around 0% when temperatures reach about 40C degrees.

There is a way you can make your GPU fan spin continuously; you need to access the GPU fan from your computer and click on “fan speed” before selecting “manual.” Drag the percentage bar to the level you want the fan to run, and in this case, you have to choose a much lower temperature setting. Click “Apply.”

GPU fans have a lifespan of around two years, and that is if they operate at full speed for 24 hours a day. This means an average GPU fan may last for more than five years if it rarely runs, primarily when cool temperatures are always maintained and there is little or no debris and clouds of dust clogging the vent.

You can easily replace fans for most GPUs, and their capacitors are rated to survive for between 5 and 7 years if they operate non-stop. Still, the lifespan may extend to 15 years if the computer system is used occasionally.

What Are The Benefits Of Controlling GPU Fan Running?

Keep in mind that the Start/stopping feature for GPU fans can create wear on the fan, but this wear and tear can reduce with the default temperature setting for the fan to run. If you constantly stay in a cool temperature environment, your GPU fan doesn’t have to run for a long time. This step will indeed reduce the likelihood of the fan breaking down.

Another benefit of the default GPU fan setting is that it will extend the fan’s lifespan, and you wouldn’t have to spend money on replacing it in many years to come.   Even if you upgrade the components and the computer system generates more heat, as long as maximum temperatures are not exceeded, your GPU fan wouldn’t run always.

Can GPU Fans Get Damaged?

GPU fans can wear out, and most significantly, the fan’s bearings will eventually wear out after prolonged usage. Unless your GPU is overheating or self-throttling, the fan should be able to operate at its maximum speed.

Once you have downloaded the tool, install it and click the box that indicates sensors. Keep in mind that you only need the sensors to detect a change in GPU temperatures. Open the software in the sensors-only mode, and then scroll down the pop-up list until you see your GPU temperature.

Depending on your computer’s GPU manufacturer and model, your specific GPU temperature may vary from 65 to 85C degrees.

You should consider the 85C degree temperature as the maximum GPU temperature your computer should operate on, and at this temperature, you must be worried. Your GPU may exceed the 85C degree limit only when under severe stress, but it is still okay if the temperature reaches such extreme temperatures occasionally and then returns to normal.  Most GPUs come with maximum temperature ratings of between 100 and 105C degrees.

Is There A Difference Between Operational Range Of CPU And GPU Temperatures?

Both CPU and GPU work together, but you will need to check and monitor their temperatures separately. The CPU works as a computer’s brain that processes all inputs such as calculations and data retrieval; the GPU, on the other hand, is a specialized processor that performs intensive and repetitive tasks quickly. For instance, it is the GPU that processes high-resolution images and video. GPUs are more straightforward in their operations, while CPUs are more flexible.

As the GPU begins to heat up, it may start self-regulating its performance to cool itself down. You may start experiencing performance issues like lower frames-per-second or a reduced image fidelity even after optimizing your computer for operations like gaming.

If you are editing images and videos and performing basic stuff like checking a file, the operations may become too slow when the GPU gets hotter than the normal range. To maximize your computer’s operational efficiency, you need to remove that digital clutter. If it’s been a while you open up your computer hardware, the GPU has likely become dusty. Particle specks of dust can also accumulate around the card, reducing heat radiation.

When your computer has overclocked too far, it can also create a sharp increase in the temperature of your GPU. Overclocking your GPU means you re-configure it to work at more incredible speeds. With overclocking, your GPU may work itself beyond its capacity.

If your computer fans are not working or working below their capacity, it can also lead to overheating. Check if your graphics card has a fan that works to dissipate heat away from the hardware casing.

GPUs have different capacities, and it is possible to overload your GPUs with complex works that will eventually slow them down.

Ways To Lower Your GPUs Temperatures

One of the best ways to lower your GPU temperature is to increase airflow in and around it. Position the computer where the fans can perform their jobs well. Never put your desktop inside a drawer or on a carpet, but a smooth surface like a table or desk. Don’t put the computer on your lap, and your lap wouldn’t allow balanced airflow on both sides.

Occasionally clean your computer and graphics cards. Open the casing and remove all debris and specks of dust you find. You may use a can of compressed air to clean those places that are difficult to reach for cleaning. Pay utmost attention to specks of dust and debris on the graphics card, fan, and heat sink.

Replace the thermal paste on your graphics card. You may want to do this while your computer case is still opened. You can find the thermal paste in between the GPU and the heat sink. The thermal heat works to radiate heat, but it may lose its efficiency and may not transfer heat efficiently again when it gets old.

Improve the computer’s cooling system. For instance, you can swap current fans with more powerful options or add more. Laptop cooling stands and liquid cooling systems are some other options you should consider too.

Reverse any overclock to improve GPU temperatures. It is essential to scale things back after overclocking your computer. If you revert to the default GPU settings, this will likely revert the temperature operating range.

Is 70C Degree Too Hot For CPU? What You Should Know About Temperatures and CPUs

Can You Use A Capo On An Electric...